Jointly developed by USC Shoah Foundation and Stanford University’s Department of Electrical Engineering, Starling is innovating with the latest cryptographic methods and decentralized web protocols to meet the technical and ethical challenges of establishing trust in our most sensitive digital records, such as the documentation of human rights violations, war crimes and testimony of genocide.

A comprehensive set of tools and principles that empowers organizations to securely capture, store and verify human history.

Starling represents a ground-breaking methodology in the fight against the spread of misinformation and the looming threat of deep fakes by providing open-source tools, best practices, and case studies that help to reduce information uncertainty in digital media.

We’ve convened a consortium of academics, companies, and NGOs in teams spread over 25 cities around the world, from Palo Alto and Los Angeles to Kigali and Taipei. With applications across news media, historical preservation, and documentation of ongoing crises and conflicts, the potential use cases for the Starling Framework are numerous.

As Web 3.0 takes root, we have an opportunity to unify images with key metadata to establish new decentralized knowledge graphs that can provide clear provenance and integrity to the data.

Trust in the media is at an all-time low with ​74 percent of Americans concerned about the spread of inaccurate information on the Internet. Today’s widespread concerns with crowdsourced content are only deepening as artificial intelligence tools are generating photorealistic “deep fake” images.

Intolerance and hate-based violence are oftentimes traced back to Internet rumors or misinformation campaigns that aim to erode general public trust with the aid of audio/visual data. This environment of mistrust has dangerous analogs to the 1930s, when pillars of mass media were attacked in Hitler’s Germany as the “L​ügenpresse​” or “lying press” to undermine objective reporting as propaganda

The stakes are high, as all stakeholders need to come together to ensure authenticated capture systems advance human rights and do not become tools of mass surveillance that undermine them. 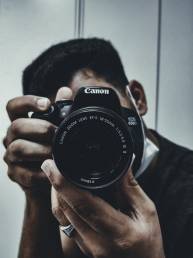 From mobile phones to professional DSLR cameras, Starling prototypes apps and firmware to create a chain of custody from cameras to digital platforms. (Key Contributors: HTC, Numbers, and Witness/Guardian Project)

Co-Founders of the Framework

USC Shoah Foundation – The Institute for Visual History and Education develops empathy, understanding and respect through testimony, using its Visual History Archive of more than 55,000 video testimonies, award-winning IWitness education program, and the Center for Advanced Genocide Research. USC Shoah Foundation’s interactive programming, research and materials are accessed in museums and universities, cited by government leaders and NGOs, and taught in classrooms around the world. Now in its third decade, USC Shoah Foundation reaches millions of people on six continents from its home at the Dornsife College of Letters, Arts and Sciences at the University of Southern California.

The Department of Electrical Engineering (EE) at Stanford innovates by conducting fundamental and applied research to develop physical technologies, hardware and software systems, and information technologies. Throughout its 125-year history EE at Stanford’s innovations and entrepreneurship have helped create Silicon Valley, from the invention of microprocessors, public-key cryptography, and MIMO wireless technology. EE’s faculty and students continue to advance the state-of-the-art, define new directions for electrical engineering and develop new technologies. These advancements help address critical societal challenges in biology, medicine, energy and the environment.